It’s been a while since Abby and I got to spend any time together – not just in the kitchen but just anywhere.  Life has suddenly just got busier for our family – we spent most weekends during the summer paving our backyard (to reduce the amount of lawn we need to mow), and that nearly broke us.  Every single Saturday, Grant and I were out doing something in the backyard.  But it looks great now – and we have vowed the next house we move into will have an established garden!

Abby is growing up … way too fast.  She’s nearly my height now and she can kick my butt in karate (which isn’t that difficult, really!).  I am so proud to have her as my daughter … and I love the fact that she jumped at the chance to spend some time with me again.

This opportunity was awesome.  An awesome chef (Freyka) at one of my previous cooking classes contacted me and said she was piloting a new class on empanadas and would like me to come and give her some feedback.  I had to think for less than a microsecond before I said a resounding ‘yes! And can I bring my daughter with me too?’.  Abby and I got to spend some time together in the car to the class and back again and some of the conversations we had … lets just say I’m glad we got the time together.

But now to the class: 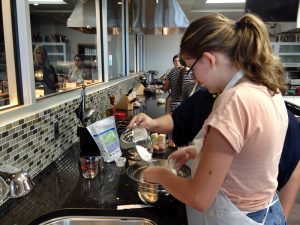 We were making empanadas, which were right up our alley from the years we spent in Chile.  Three types were on the menu: a Venezualan empanada de viento, which was a cheese-filled deep fried empanada, Peruvian beef empanadas (Peruvian because they were baked – if they were fried they would have been Argentinian) and a Costa Rican pineapple and coconut sweet empanada.  And our challenge was to make them gluten-free and to trial how they would work in a class. 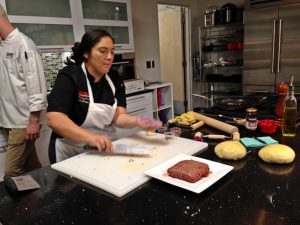 Obviously Abby and I were on the gluten-free team – another team got to make them with all the wheat flours etc – and we were joined by two other awesome people who also have food allergies.  How did we go?  Well, the team making the ‘normal’ empanadas did really well – their empanadas looked like they were supposed to …

Our cheese empanada actually formed ok, but ended up being like little rocks.  Our beef empanada pastry just did not want to hold together and stretch out properly, so we made it into a pie. 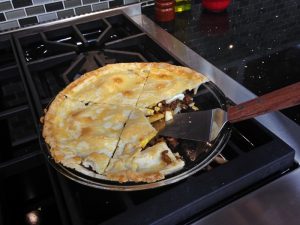 And our pineapple and coconut empanadas also had troubles being rolled out so they were formed into little cookies in the base of ramekins with the filling on top.  They tasted pretty good (apparently – I didn’t have any of them because (a) they had dairy in them and (b) I’m starting the Whole30 where I am not eating any gluten/dairy/grains/legumes/sugar… but more on that in a separate post). 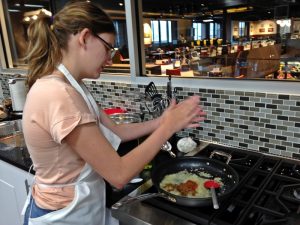 We learned a lot at this pilot cooking class – how to make 3 different types of empanadas in the time allotted, and that gluten-free pastry is REALLY difficult to work with.  I’m looking forward to the challenge of trying to assist Freyka in coming up with no-fail gluten-free pastry crusts … I haven’t yet succeeded with a gluten-free pizza crust, which is starting to annoy me!  I do have an empanada recipe on this website (see here), but it may be a little complicated for a cooking class – Freyka, feel free to give it a go!

Anyway, Abby and I had a great time learning stuff about cooking again, and most of all, just hanging out together again.  Thank you to Freyka Nunez del Prado for making this possible, and for Harmons Cooking Classes for providing the location.  Also the awesome people I got to meet at the class – go check out their websites at kiwi and carrots, life made simple bakes and the diy foodie!

If anyone else wants help trying out new recipes etc, I’m happy to oblige – just let me know!

Until next time, enjoy cooking at home … with your kids! 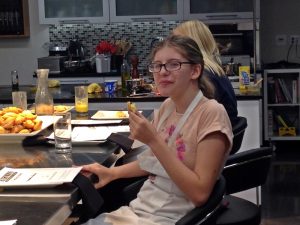 2 thoughts on “Empanadas in America”

This site uses Akismet to reduce spam. Learn how your comment data is processed.

Enter your e-mail address to get the latest delivered to your inbox!

Sign up for the latest recipes and adventures from my kitchen!